Periodically, I will feature people and places that I believe have played a part in making this city magnificent. Sid Naidu is the first one.

I remember being extremely lost on my first week of university – that was TEN years ago.
For many reasons, I felt like I wouldn’t belong in a place that I told was made for a special class of people. I, like thousands of others, have experienced a sense of unpreparedness for higher education, because of the financial privilege it requires, because intellect is often a racially defined concept and because we are taught that success is a form of superiority. Failure is unfortunately a sidelined concept in life. The truth is, many of us don’t fail enough.

During my first month of school, all these preconceived notions of university started being redefined, mainly because I met  Sid Naidu. I remember being at Ryerson’s cafeteria/hub space and seeing Sid handing out flyers for a hip-hop event at the pub and I thought  to myself:

“Hip-hop? At a university?”

I didn’t think there was room for anything extracurricular, let alone anything that interested me. I met specific people who told me where they came from, Sid being one of them, and who made this new chapter feel less foreign to me. 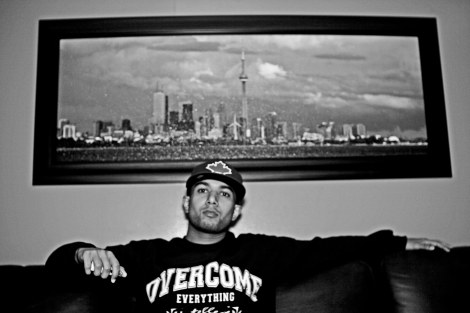 Sid told me that he was a second-year student in Arts and Contemporary Sciences and was hosting what he described as a “revolutionary” event, and told me that I should tell all my friends about it. While revolutionary may have been an adjectival term then, it’s now built into everything Sid is. He’s a Scarborough kid, which meant that back then he was commuter, which also meant that he understood that the university dynamics needed to change (not everyone there came from luxurious places) and that post-secondary elitism it all its forms needed to go. He believed in changing anything that didn’t feel right. He wore a ponytail and a baseball hat, and despite how strange it sounds to say it now, back then you could count how many men walked around a university looking that different and feeling 100% comfortable. He explained that “because of how racialized we were, we couldn’t look ambitious.” Cultural diversity may be a Toronto highlight today, but those who are in their late twenties know that racial diversity made its way into academia much later in Toronto’s history.

Immigrants’ children know this: they live with a constant pressure to succeed, in order to compensate their parents’ hard work, yes, but also to challenge the notion that immigration is synonym to social inferiority. It isn’t, and one by one, second generation immigrants have shattered the idea that being sons/daughters of taxi drivers, caretakers, construction workers, store clerks and cooks is a limit, and instead proved that it’s a motivation folded into pressure.

“I was raised with the idea that race classified the world”, from Bahrain to Canada, Sid looked for a sense of belonging and had to build it from experience. Some east Indian, twisted into some Arab culture, flipped into some Scarborough … but the picture is still being pieced together. Sid’s search for self is far from over. For him, getting lost in the search is a lesson, not a challenge.

Being the son of Indian parents and having had a culturally and religiously mixed childhood means that Sid Naidu doesn’t believe in simplicity, in limits or in anything conventional for that matter. He founded the Urban Hip Hop Union, which grew to be a hub for the music, culture and dance enthusiasts. He ran for the students’ union and left a pretty heavy imprint at that school. While many people settle now, and look for ways to be stable and reasons to be content, Sid doesn’t, he believes in the power of telling stories, so his art shapes his vision, he believes in the magic of connecting (those who know him, know he loves that word), so he’s on the go, all the time. He doesn’t believe in comfort zones. He had heard – many times – that he wasn’t deserving of success so he now molds it with his own definitions. And because he’s story teller, he makes the success story his own.